Today was back to work day. Whether it’s after the weekend, after holiday or, in my case, after a few days off sick, going back to work after a few days off always seems like a challenge. This morning started early with me waking up at 6am (the early shift kills me in the mornings, but it is always worth it when I get to walk out at 5pm.) Luckily I had fully anticipated how difficult it would be for me to get up this morning so I had prepared myself the night before by getting my uniform ready, my lunch was waiting for me in the fridge and everything else I needed was ready and waiting in my bag.

I headed out the door at 7am and although I was already drained, I was genuinely excited to get back to what I’m used to. I drove to work and was pleased to see the children arriving nice and early. Unfortunately I still felt very ill today and this meant the day really took its toll on me, right now as I am writing this I am SO ready to curl up and fall asleep! Luckily I work with a lovely bunch of ladies and there were some lovely little toddlers to keep me amused and get me through the day. I headed out of work at 5pm, very happily escaping before the home time chaos began, and got into my car ready to head to brownies. Unfortunately for me, a Thursday is always such a long day as I go straight from work to Brownies, another thing which I love to do but when you’re ill it’s not quite as tempting as laying in bed.

We had a super exciting night planned at brownies which involved making an aeroplane (essential meeting prep?) and jetting off to four different locations. We enjoyed visiting Jamaica, Poland, Denmark and Iceland. At each of our destinations we enjoyed trying some of the local delicacies; Jamaica offered coconut, pineapple and a lovely shot of tropical punch (non alcoholic of course!), Poland offered up some local biscuits and crisps, Denmark gave us pastries and breads and Iceland fed us some yummy cinnamon pancakes with Jam. Of course we couldn’t spend the night just eating – I mean I could but I didn’t get to vote.. – so we also got to play some local games at each of our destinations. Our journey began in Jamaica where we played a clapping game called ‘STOP,’ a very simple game which I nearly won! Our next stop, Denmark, involved a game in which I was described as a whale and the girls were all fishes. We all went swimming in the sea and when ‘THE STORM IS COMING!’ everyone had to run back to their chairs and whoever made it back last had to make the way back into the sea as they had lost their home. Very much like musical chairs, except Danish. Poland had a slightly more active game which was very much like our volleyball except instead of a ball we had to throw a rubber ring to either side. Our final stop, Iceland, didn’t have a game as such as we used a stone and a sharpie to draw a design of either protection, love, dreams or adventure and create Icelandic rune stones. 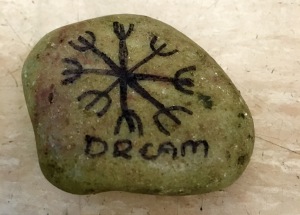 After a fun night with the brownies, I headed home to my best friend who had already prepared dinner for me. Unfortunately a mix of eating too much already and feeling really horrible and poorly meant that I didn’t get to eat too much before giving up and just settling in bed.

Today seemed like an impossible task when I thought about it; getting up early and going to work followed by an evening of more children at brownies, all whilst I was feeling horribly ill is never my idea of fun. Fortunately for me it turned out to be just that, I really enjoyed my day at work, something which I am lucky enough to say regularly and I had one of my favourite evenings I have had at brownies so far. I personally do believe that I am lucky to be able to enjoy the mundane, boring days as much as I do and I think the people who I choose to spend my days with are a big part of that.