Today was a pretty exciting day because it was the day that we had decided to celebrate my friend’s birthday. We had decided to go and do an outdoor laser tag session, although a bit nervous, I was so excited about it!

I woke up and lay in bed for a little while just watching TV with my boyfriend before I decided it was time to get moving. I jumped in the shower and got myself dressed (jeans and a t-shirt with a leather jacket and converse, if you’re wondering) before munching down some breakfast and driving to pick my friend up. I picked her up and we drove to where we work as that’s where we had agreed to meet everyone else. I drove to the place which was reasonably close and we were off. We had to put a set of overalls over the top of our clothes and we had a cap each to show what team we’re on. We were blue team! 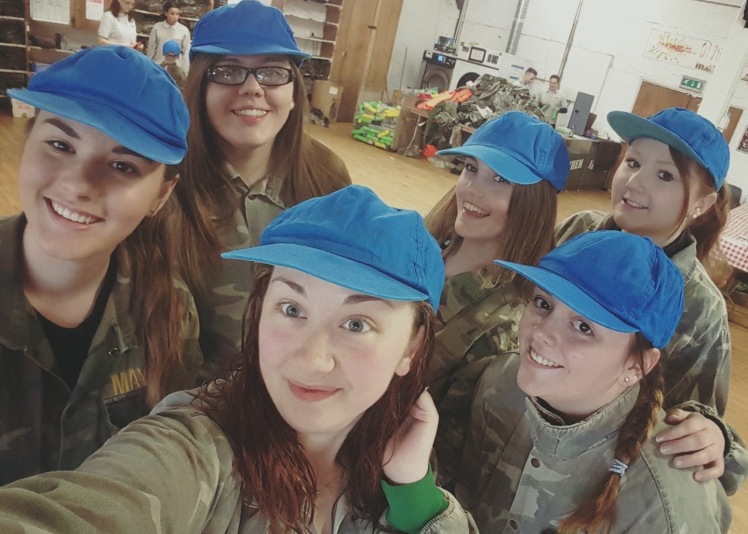 We went through to a room where they explained to us how the laser tag guns worked and they attached some laser sensitive sensors onto our hats so that people could shoot us! We went through four different outdoor locations where we played a range of games such as blue vs. red, defend the towers and protect the VIP. It was really fun and despite being really nervous we all had such a good time! After we finished we handed back in our overalls, guns and caps before we decided to drive round to a nearby garden centre. We got ourselves some lunch, I had a jacket potato with beans, cheese and coleslaw and a cream soda. After lunch we headed home, I dropped the girls off and I went home to sort out some washing while my boyfriend was doing some DIY (more on that soon..)

I meant to do some coursework but instead I did what I always seem to do when I go on my laptop, I decided to browse the internet and somehow ended up doing a little spot of online shopping.. Oops. I did get a little bit of coursework done, but not a lot! I also decided to plan out my month in my bullet journal, I’m probably going to do a post on how I use my bullet journal to track my monthly and weekly tasks, keep your eyes peeled for that.

In the evening my boyfriend’s mum cooked us a yummy dinner of dauphinoise potatoes and Swedish veggie balls. It was really nice and we relaxed on the sofa watching take me out and Britains got talent. When it had finished we came upstairs and watched a couple of episodes of Project runway before we were both exhausted and it was definitely time for bed!